How on earth do we get our message across to those who can make a difference?

We have numerous Fathers groups, Mums groups and Grandparents groups, all raising awareness of the emotional abuse caused to children and grandchildren, by alienation, and yet it feels as though we are treading water.

I spend many hours, like others, writing to organisations across the UK, those who are there to support and help children and yet none of them will acknowledge the emotional abuse or any change in the law.

Even though The World Health Organisation has now acknowledged Parental Alienation it seems others are above the WHO.

If your organisation is set up to protect children from cruelty, then that should include the life long damage done to children through emotional abuse, coercive control, that occurs in alienation.

Why are these organisations so reluctant to stand up for the millions of children that are suffering from this form of abuse, now, today, everyday.

We have a Family Justice system that is not fit for purpose, we have a government who do not prioritise families and children, family has been downgraded to the lowest level I have ever seen.

Here is the reply I finally received from one of those organisations. I must point out that in my previous letters, I did not mention once anything at all about Grandparents Rights, but I stated clearly that we are talking about the rights of grandchildren, presumably my letters were not read properly.

Was I surprised at this response, sadly no I wasn’t. 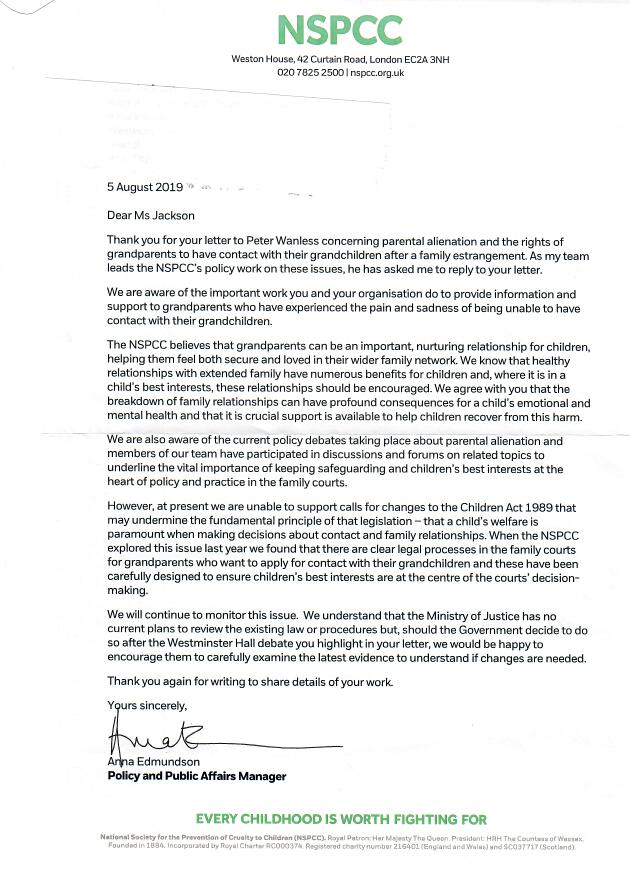 Someone, somewhere has enormous power and will no doubt continue to block anything we try to do to highlight the emotional abuse caused to children who are experiencing the trauma of being alienated.

Child Protection is of course paramount but this response paints a picture of non-resident parents and grandparents of somehow suddenly becoming a ‘safeguarding’ issue.

The non- resident parents I know and grandparents are just ordinary people, they are not monsters, they love their children and grandchildren, these children want to have a loving and caring relationship with them all.

Wishes and Feelings in the family court are a nonsense, anyone who has experienced, really experienced estrangement/alienation  know that children are told what to say/ or they have been so brainwashed by a resident parent that they believe these people are bad people/ or their loyalties towards a parent is so strong they don’t want to upset that parent.

Who else is blocking what is right for children?

I have written many times before about my feelings, but to stick my neck out again I will say that feminism is playing an enormous role here.

I am proud to say that I truly believe in equality but I am not a feminist, at the grand old age of 66 I have seen how the feminists lobby have jumped on the equalities bandwagon.

Equality and feminism is not the same thing.

Sadly there are many feminists who portray all men to be bad and dangerous, their male children are being brought up believing that they are somehow a second class citizen. Males no longer know what their roles are, they don’t know where they fit.

True equality is just that, treating everyone equally regardless of gender. It is not about anyone being better than anyone else.

The pendulum has swung too far the other way.

So why are feminists so powerful?

Anyone who has ever dared to suggest that they are wrong will have been on the receiving end of some vicious vitriol from the feminists themselves, so for those in power they wont cross them for fear of repercussion and being accused of being anti-feminist!

So in the middle of all of this ego power there are innocent children. Children who are trapped in this horrible prison of estrangement/alienation, children being denied healthy relationships of people they love. Children with no voice, and it appears children who are not getting the support they all deserve.